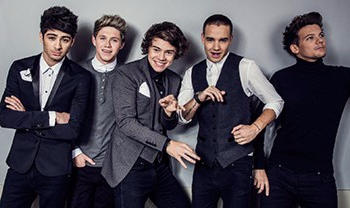 I think we’re talking about the guy in the turtleneck, right? (Source: TV Tropes)

To be honest, I know very little about the artists formerly known as One Direction. I knew a few of their songs and knew my cousin had a crush on the one who dated Taylor Swift, but that was about it. I was a sophomore in college by the time their first album came out, so I was not their target audience. (No shade to any college-age Directioners out there!)

When I saw this past week that the Guardian had interviewed former 1D member Louis Tomlinson, I almost scrolled past. But the headline stopped me: “Niall is lovely, Zayn has the voice, Harry is cool, Liam gets the crowd going … then there’s me.”

Tomlinson and his fellow boy-banders were on top of the world for a good few years. They churned out one hit song after another, sold out stadiums worldwide, and were hounded by millions of screaming preteen and teenage fans.

And yet, Tomlinson did not feel valuable. In the Guardian interview, he says, “You know I didn’t sing a single solo on the X Factor [the show by which 1D was formed] … But when you actually think about how that feels, standing on stage every single week, thinking: ‘What have I really done to contribute here? Sing a lower harmony that you can’t really hear in the mix?’”

I never thought I’d say this, but I can totally relate to this multimillionaire/former boy band member. How often have we looked around at our friends and coworkers and classmates and felt insignificant or overlooked? “Why did he get that promotion and I didn’t?” “She gets all the guys and I haven’t had a date in two years.” “Why bother trying? No one ever notices me anyway.”

When I did high school theatre, I used to joke that I always played “the crazy old lady who dies at the end,” i.e. not the ingenue. While I really enjoyed playing the crazy character parts, I had a desperate desire to be the young, pretty lead. Like any high school girl, I wanted other people to tell me I was beautiful, talented and worthy of singing power ballads in a flowy white dress. And since I never got the lead, no matter how hard I worked, I thought I must not be beautiful enough or skinny enough or talented enough for people to want to spend a whole evening looking at me. I must not matter.

I carried that resentment into my community theatre career as an adult. One night, I was talking with a few of my castmates about our high school theatre days. As usual, I joked about always playing the crazy old lady, but the lead actress in the show could sense the bitterness behind my laugh. She looked me straight in the eye and said, “You know why you always got those parts? Because you had talent. You look around at all the girls who played the young, pretty ingenue in high school. They’re not getting cast now, and you still are.”

She was right. The majority of the kids who got the lead roles in my high school are not performing anymore. You know who still is? The ensemble, the supporting cast, the kids who lurked behind the shiny lead actors, honing their craft and learning from every single role, even if they only had one line. Many of them have gone on to play lead roles, or their own dream roles, after high school. If they had given up in high school, they would have missed so many opportunities to shine.

Similarly, while band members Harry Styles and Zayn Malik got most of the media attention, Tomlinson used his time out of the direct spotlight wisely. According to the interview, he learned how to negotiate with managers and label executives backstage, which led him to start his own record label. He also became a father, the first member of the band to do so. On top of all this, he just released his debut solo single and is working on new music.

It’s difficult to say where Tomlinson’s career goes from here. Perhaps he will “make it” as a solo artist, maybe not. I honestly wouldn’t be surprised if in a few years, he’s the “it” record producer that everyone in the music industry is dying to work with. In any case, 1D was not Tomlinson’s time to shine, but that doesn’t mean his future is dim.

If you’re feeling like a Louis in your own life, don’t despair. Nothing is permanent in this life, even boy bands. Find that one thing that fills you up, and become an expert at it. Learn about the behind-the-scenes processes. Take every opportunity as a chance to grow. Be humble. Ask questions. Make mistakes. Remember that the current situation you’re in is not your end point.

My favorite quote attributed to St. Catherine of Siena is, “Become who God meant you to be, and you will set the world on fire.” This, in essence, is what truly makes you beautiful.