One of our recent assignments for Blogging 101 was to try a new type of post. I’ve been wanting to do reviews on this blog for a while, but wasn’t sure how to go about it. With the dawn of a new year, and me taking on PopSugar’s 2015 Reading Challenge, I’ve decided to post my reviews of the books I’m reading in 100 words or fewer. Obviously, this introduction doesn’t count.

Challenge No. 1: A Book You Can Finish in a Day 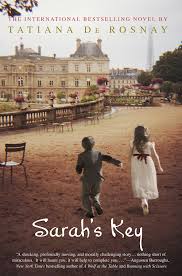 Hundred Word Review: On July 16, 1942, 10-year-old Sarah is awoken by French police coming to arrest her family. She locks her little brother in the cupboard for safekeeping, thinking she’ll return soon. Sixty years later, an American journalist learns Sarah’s story while researching the Vel’ d’Hiv’ roundup, when more than 13,000 French Jews were sent to Nazi death camps. I finished this book in less than five hours. It combines many of my favorite subjects — France, journalism, history — and tells two equally gripping stories. Sarah and Julia are beautifully written, unforgettable protagonists. This is a must-read for francophiles and history buffs alike.

Check out PopSugar’s challenge and let me know in the comments if you have a book recommendation for one of the categories. And if you want to do the challenge yourself, let me know what you’re reading!

Next up, “a book a friend recommended.”

It’s my first weekend off since I graduated college.

I know, it sounds bizarre, considering that graduation was almost four weeks ago. I am blessed to have been able to spend a Saturday afternoon touring my new hometown — at least for this summer — in Florida. But God lead me through some rough spots over the past few weeks in order to bring me to a place of tranquility.

Back in November, I was offered a copy editing internship through the Dow Jones News Fund. It was a huge shock for someone who has never taken a journalism class. I was excited beyond belief to spend a summer in Florida working for one of the most prestigious news organizations in the world.

After I graduated college, I raced home to pack up my life in two days, and then headed to Temple University in Philadelphia for a week that can be best described as “journalism boot camp.” Imagine cramming a semester-long introductory course into just a week. I, along with 12 other interns from all over the country, had eight hours of class every day, and at least six hours of studying to do every night. We were tested on Associated Press Style, New York Times Style, spelling, geography, headline-writing and countless other subjects. I’ve always considered myself a good speller, but bombing my first spelling test eradicated that notion.

There was only one other non-journalism major in the room, and from my perspective, he could rattle off terms like “pica” and “refer” with as much finesse as any of the others. I was so intimidated, so afraid that whatever I said in class was insipid or wrong. I was terrified that, because of my lack of a journalism degree, I would personally be responsible for the undoing of a prestigious internship program that has been running for more than 50 years.

I know, it sounds dramatic, but we all have been in that situation of feeling inadequate, especially when we are surrounded by the best in our field, any field. We feel like our own God-given talents are insufficient to distinguish us as the best, the brightest or the most talented of the group. And we get angry at ourselves, even at God, for our lack of perfection in a culture that thirsts for and esteems it.

I was brought to this low point after the second day of class. I needed Jesus, but He seemed so far away. Then, I remembered something I had packed in my suitcase.

It was a little blue pamphlet, “The Catholic Devotional,” that I had thoughtlessly picked up at the church downtown in my last few weeks of college. The final prayer in the book caught my attention:

‘My Jesus, how often I feel very small and inadequate before great tasks and responsibilities. What can I do but bring all that I have, even though it isn’t much, and place all this in Your hands, wait for Your blessing, breaking, thanking and receive back again with amazing power to reach all who depend on me, fill them with goodness and still have more than what I started with. May I never hold back my gifts from You. May I believe that Your blessing multiplies my smallest gifts to maximum powers. May I rejoice that You return the task to me and I have the personal thrill of seeing many satisfied by my ministrations. I adore Your wisdom, Your power, Your sharing. Amen.’ – Father Gerald Keefe

I said this prayer out loud once, twice, and was filled with strength and peace. I may not be the most talented or most informed journalist, but God can still use me. And He has been using me, even in my first week of work. I haven’t been as harsh on myself as I tend to be because I know that the job will get easier as time goes on.

And my limited journalism experience hasn’t hindered me or made me lose credibility at work. As it turns out, many of my colleagues never took a journalism class either! They just saw an opportunity, worked hard, learned as much as they could, and got to where they are today.

In previous posts, I’ve talked about the idea that God did not give us our gifts to glorify ourselves, but rather to use them to spread the Good News. The Bible is filled with little people making a big difference, simply because they had faith that God would multiply their simple gifts for His glory. Even one of our greatest saints, Paul, knew that God chose the weak things of the world to conquer those which are mighty (1 Corinthians 1:28).

If you are feeling small and unworthy, remember that Jesus died on the Cross for the small and weak because He knew they were worth it. God gave you gifts. Use them.

What is your go-to prayer or verse when you’re having a bad day? Let me know in the comments, and let’s give the Internet a dose of inspiration and love!

P.S. I haven’t been able to find any information on Father Keefe, who wrote the above prayer. If anyone knows a good resource, please share it in the comments. Thanks!

There was an error retrieving images from Instagram. An attempt will be remade in a few minutes.