Challenge No. 3: A Book with A One-Word Title

“Confessions” by Saint Augustine, translated by Garry Wills, finished April 23. I know I said I would do the one with nonhuman characters next, but it got complicated. 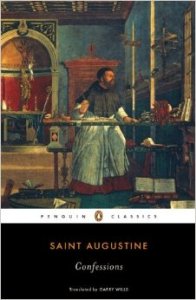 Hundred Word Review: Augustine of Hippo’s testimony is a staple in Catholic literature. Born in Africa in 354, he became a celebrated orator and conceited playboy. His mother, Saint Monica, prayed to the point of suffering for years for his conversion to Catholicism. Finally, Augustine became a Doctor of the Church in the ultimate come-to-Jesus story. Every Christian needs to get their hands on this book, but don’t expect to read it in a week. Beneath all of Augustine’s rich language and profound philosophy are moments that make you say, “That’s so me.” Take your time with this book. It’s well worth it.

Check out PopSugar’s challenge and let me know in the comments if you have a book recommendation for one of the categories. And if you want to do the challenge yourself, let me know what you’re reading!

Next up, “a book set somewhere you’ve always wanted to visit.”

Wow! I don’t think I’ve gotten this much online and in-person feedback on a post in a long time. I recently wrote about why I think my American accent is really unattractive, and I got a surprising number of comments, messages, and people coming up to me to talk about it. Though my intention was to write a lighthearted commentary on accents in general, many readers didn’t take it as such. In light of this, I decided to write a follow-up in which I addressed some of my readers’ concerns and tried to make peace with my Yankee accent.

A few months ago, I accompanied my students on a field trip to see an English-language play. All of the actors except one were British- or American-born. At the end of the show, there was a Q-and-A session. They called on me, and I spoke slowly and distinctly so my students could understand the question. One of the actors, who was from Chicago, said, “Wow, we have a bunch of Brits over there!” I laughed, but I was thinking, “Really, dude? You can’t recognize one of your own?”

In talking about my accent, I think of this story because it shows that while I’ve been fleeing my American roots in some respects, I’m still taken aback whenever mistakes me for anything but American. I can’t blame Mr. Chicago for the confusion; my accent is especially weird around my students. Many of the French teachers I work with learned British English in school, not American, so their pronunciation and vocabulary lean heavily toward that side of the Atlantic. Though American English is becoming more widespread thanks to Netflix and the Internet, most French students learn British words before American ones.

As such, I’ve had to adjust my vocabulary and accent so my students understand me: “Please write your homework in your diary. Make sure you revise for your test. Put up your hand. Don’t eat chewing-gum. No mobiles in class.” I’m sure many of you American readers are thinking, “I’d never say it like that!” I’m not even sure if British people talk like this. However, as anyone who has ever studied a language knows, learning from a textbook is very different than having a conversation with a native speaker. I’m sure if any of my French friends flipped through my high school French textbook, they would laugh at the awkwardness of the French sentences I’m expected to learn. I didn’t think I was so proud of American English until I caught myself saying, “Well, in America, we say ______,” on a daily basis.

As much as I love to critique and poke fun at American culture, it’s the one I was raised in. It formed my identity whether I wanted it to or not. It’s a hard-earned privilege to be able to speak a foreign language well in a country that doesn’t put nearly enough emphasis on learning languages (another rant, another time.) I’m still amazed that I can walk into a store and ask the salesperson a question without them immediately switching to English. Every encouraging comment — “Tu parles très bien français!” — feels like a blow to the obnoxious American tourist stereotype. And since busting stereotypes and glass ceilings is one of my favorite hobbies, I feel all the force of the compliment.

With this newfound encouragement, I’ve been trying to appreciate my accent. Even if I don’t like it, some French people may find it endearing, and many can and are willing to listen past it. I’d like to take this opportunity to thank the wonderful friends I’ve made in France for being patient as I struggled to form a complicated sentence, for gently correcting my mistakes, and for taking the time to get to know me. I wouldn’t be at the level of French I am today without you. Merci mille fois.

To anyone who also feels insecure when speaking a foreign language: An accent means you’re trying. That’s the most important thing.